Gemstones and How Their Quality is Graded 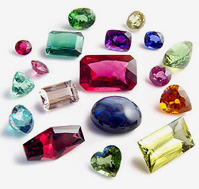 Gemstones, which may also be referred to as gems, jewels, precious and semi-precious stones, are mostly pieces of crystals (minerals) which are considered valuable (at least to some extent, which varies between the different types of gems). Gems, mainly in a cut and polished state, are used to make jewelry and other ornamental items.

There are gemstones which are not minerals, these may be rocks (lapis for instance) or even organic materials (such as amber – hardened tree sap or pearls – which grow in oysters).

Precious and Semi-Precious Stones
Gems owe their value to being considered attractive thus coming under high demand while their supply remains limited as they occur naturally, are relatively rare and must be located, mined or collected and finally also cut and polished.

Of all gemstones four alone enjoy precious stone status while the rest are considered semi-precious only. Diamonds, obviously, are precious stones, as are rubies, sapphires and emeralds. These four stones are both rarer than other gems and share other qualities such as translucence (at least to some degree) and hardness (they rank eight through ten on the Mohs scale, a scale used to describe hardness and on which diamonds, being the hardest material on earth, rank ten).

Categorizing Gemstones
Gemologists use widely accepted terminology to describe gem characteristics. They may refer to a gem not by its name but rather according to its chemical composition, diamonds (which are made entirely of carbon) are therefore – C while rubies and sapphires – Al 2O 3.
Since many gems are crystals the pattern in which a gem is crystallized may also be noted (main crystallization systems are – cubic, trigonal and monoclinic).

Gemstones are divided into groups or families. Among gems which belong to the corundum family are rubies, which are a red variety of corundum, and sapphires, which are corundum of any other color.

Other terms used to describe gems are their “refractive index”, “hardness”, “cleavage”, “dispersion”, “luster” and many others.

Assessing a Gem’s Value
Except with diamonds, assessing a gem’s value is anything but uniform. Diamonds are graded according to the famous 4Cs (Carat, Clarity, Cut and Color) but grading other gems just according to the four Cs is impossible . This is not surprising as different gems have different traits which are considered desirable.

Many gemological institutes offer gem grading services, it is not uncommon that if a certain stone is graded separately, by two independent laboratories, there will be differences in the grades it receives, in the way it is described and ultimately also in the value attributed to it.

Such differences are being minimized through a joint effort made by several leading gemological laboratories which have established the Laboratory Manual Harmonization Committee (the LMHC).